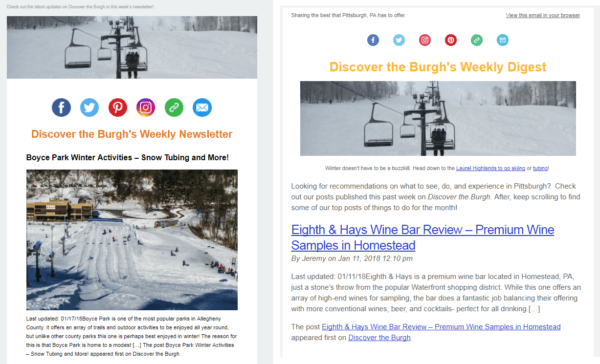 In the many years of running our travel blog's newsletter, we never had an issue. We'd send out our weekly RSS email via MailChimp, get a nominal amount of clicks, and move on.

But as time ticked by and our subscriber count went up, so did our fees. Our local Pittsburgh blog contributed the most of this gain, and we realized we were days away from hitting the 10,000 subscriber limit that bumped our fees to $100/month- holy crap!

As our spending for the newsletters amounted to about $0.10 to $0.30 per click, we knew there had to be a better way. Do we delete inactive subscribers? Do we try and get better engagement? Do we switch services?

Enter MailerLite– the answer to all our questions. And in this MailerLite review I'm going to share how we became converts from MailChimp on Day 1.

What is Special About MailerLite? Nothing… and That's a Good Thing!

We had MailerLite recommended to us by several blogging colleagues who were aware of our pending issue, and a solid percentage all told us the same thing: MailerLite is a deal.

It piqued our curiosity and we quickly ran to the pricing page to find out that with the same subscribers we would be paying just $50/month.

Going even further, if we decided to pre-pay a year in advance they offer a 30% discount- meaning that paying yearly ($420) we would cut our total fees down by $780.

I signed up without even looking at what the service involved.

Using our newsletter as a glorified RSS feed was expensive in its own right, but saving 65% on our current bill would get our cost per click average to be in line with what we receive on Facebook (read: pennies). We didn't care if there was a reduction of quality, we were in.

A Surprising Find – Mailer Lite is Almost Identical to Mailchimp!

It didn't take long for us to get a sense of familiarity with MailerLite. Within seconds of logging in to the dashboard we felt like we had been here before, and it was because MailerLite is so similar to Mailchimp that it is almost a clone!

We can't say whether or not this is by design, and I'm certain that neither service would like us saying this, but it is how we see it.

If you are familiar with Mailchimp at all, working your way through MailerLite will be second nature to you. As we worked through the migration and startup tasks, a pattern emerged:

So while it took us a few hours to set up both of our lists and get everything going properly, this was a drastic reduction in time over what it could've been. We already knew what we were doing from the get-go.

A few things did strike us as different on MailerLite during our account set-up, insofar as we are aware at least, and they were as follows. 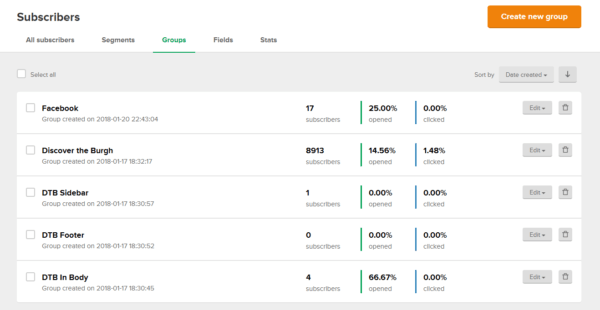 First, MailerLite has a thing called “subscriber groups” that must be published before building an embed box or uploading existing subscribers. These are subsets of your general list that can be tied to a specific subscribe box.

So say you want a subscribe box purely for your sidebar, you'd first create a group called “[X] Sidebar” and then when creating the form you'd click a box to reference this group. 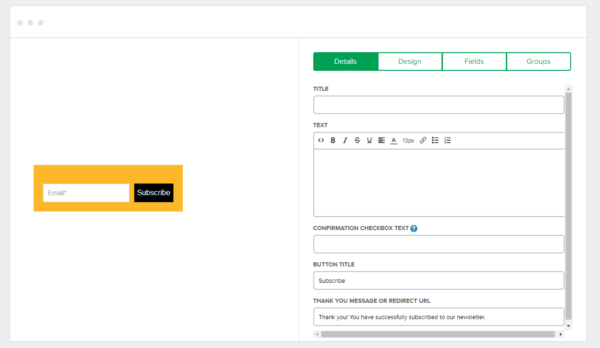 It is only slightly time-consuming to set up if you want one for every instance of your subscribe box (we have five on each site), but is a great way to help monitor where your subscribers are coming from.

We never knew we were getting so many from Facebook!

This is different from the “subscriber segments” feature which lets you distribute your list into different channels based on activity data.

When sending a campaign you can send a newsletter out to the groups individually, or your entire list (we do the latter, naturally).

Second, MailerLite lets you organize your subscribers based on a number of parameters including # of emails sent, # opened, # clicked, and subscribe date.

This one is extremely useful long-term when you grow into a new fee level as you can go through and purge people who've been on the lists for a while and never opened a single email. No need sending out a re-confirmation email when the stats tell the truth outright!

A lot of the above data is also available on the individual campaign level, which we also appreciate even if we'll likely never use it based on our current setup.

Finally, there is a safety feature for weekly RSS shares in that you can limit the total of number posts pulled as well as limiting to only new posts.

This one is key to understand because we started our campaign after publishing our newest posts for the week, so when it came time for our first campaign to go out we got an email that no newsletter was sent because we had no new posts.

We had to go in, override the setting to send the three most recent posts, and off it went. After it went out we went back in to our dashboard and enabled the feature to limit to only new posts, published new content for the week, and off we went as designed.

Just a nuance to keep in mind when you change your newsletters around in the future!

A Few Things to Consider Before Joining Mailer Lite

One thing that took us by surprise with MailerLite is the approval process required for setup for most accounts. As we had started our lists fresh on Mailchimp, we had never experienced it before.

MailerLite will let you purchase a subscription for your list right away, but when you go to send your first campaign you'll likely hit a manual approval roadblock.

Once you submit at this step MailerLite will review your account to ensure you are not a spammer (always a good thing) and will generally approve accounts within a day.

This is important to keep in mind for two reasons:

We actually fell into the first category with our Pittsburgh blog because our list was so large that we had to provide proof. We had a bit of a mix-up with the customer service rep we spoke to (who I think went home right as we were sending our screenshots), but we re-sent to the fresh customer service line the following morning and were approved within 15 minutes.

Likewise, if you are migrating from an existing service, like we did from Mailchimp, its worth keeping in mind that your list migration is manual. MailerLite has no way of tracking how your account performs from its previous host.

This is important to note because if you take a period of days or weeks to set up your account before going live you may get more subscriptions (and unsubscriptions!) on your existing service. If you've uploaded your list early on, you may miss out on these changes.

I'd hate to miss out on a subscriber during the migration, but I'd hate to piss off someone who unsubscribes and is kept on even more.

So watch your list performance closely or, in an absolute worst case, wait until the last minute to upload your existing list to minimize these kind of issues. In any case, watch your list updates in the first few weeks after migrating as someone may still go in and unsubscribe from an old newsletter!

My only negative critique of Mailerlite is that the subscription boxes are not the fastest out there. A few times we've seen them take on the order of 0.5 to 1.0 seconds to load and thus slightly delay our site's load time. As such, we decided to load these through the WordPress plugin AdInserter Pro in order to lazy load them on all instances below the fold- a fairly easy fix!

Still not anywhere close to a deal breaker though.

Overall, MailerLite is one of those services that we fell in love with immediately and wondered why we took so long to join in the first place.

In this particular instance it was because we didn't even know it existed, but you now have no excuse- join MailerLite and save a lot of money on your newsletter service today!